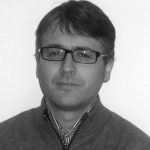 Lecturer in the University of Santiago de Compostela (Spain), Fernando Redondo Neira was in the CECS in the context of a IACOBUS programme, as a result of a cultural cooperation between the North of Portugal and the Spanish region of Galicia. His research wanted to study the Film Festival of Vila do Conde, in Portugal, then supervised by Moisés de Lemos Martins.