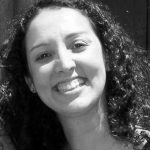 PhD in Communication Sciences by the University of Minho, in 2016, Francine is currently working with the Portuguese Media Regulatory Entity (ERC), within the Media Monitoring Unit. In Brazil, she is part of the De Jure journal, serving as permanent reviewer, associated with the Centre for Studies and Functional Improvement of the Public Minister from the Minas Gerais State in Brazil.

She carries out research about cultural identities, social representations through the cinema, migration movements in Portugal and Brazil. Francine Oliveira is a member of Sopcom – the Portuguese Association for Communication Sciences – in the Working Group “Young Scholars” and of the Permanent Seminar “Communication and Diversity”, held in the CECS.

In 2001, she has co-founded, in the Federal University of Ouro Preto (Brazil), the discussion group Cinefilia, in order to promote the debate about cinema and foster publications in this regard. Francine was involved in award-winning project Estudo dos Media “O case do Bug que não houve”, by the research company on social communications Idéia Fixa Clipping & Pesquisa, in Belo Horizonte (Brazil), which has awarded with the Aberje Minas Gerais Prize, in the Innovation category (2000).