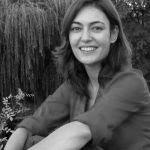 Marta Noronha e Sousa started out by exploring several professional options, but has dedicated herself to professional training, since 2002, to teaching higher education, since 2005, and to academic research, since 2008. In addition to several participations in scientific conferences and publications, and to teaching, the organization of scientific events e directing activities in the Institute of Higher Studies of Fafe, she has published her master’s thesis, Narrative at the Crossroad: The question of fidelity in the adaptation of literary works to the Cinema (2010, CECS, UM), and has participated as a grant researcher in the project Processing Social Signals in Human-Computer Interaction (engageLab, UM), working specifically on non-verbal communication. In 2018, she concluded her PhD on Communication Sciences in the University of Minho, with the thesis titled “The Propagation of Stories Through Multiple Media: For a typology of transmediation, adaptation and other derivative forms”. Her research interests are currently concerned mainly (but not exclusively) with narrative and fiction between multiple media e the narrative dynamics and formats in the new media environment, its evolution and implications in culture, through a transversal approach to media.